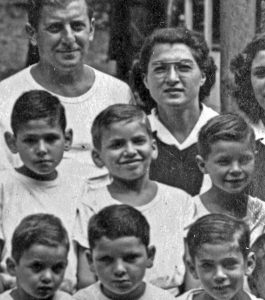 As I look back on the past eighty-one years of my life, it is obvious to those who have known me that I was born a leader. My purpose in stating this is not to brag or self-aggrandize but simply to acknowledge that leading rather than following always came naturally to me. My earliest memory of this trait is when I was about six years old and I formed a little club of kids; or it could have been that the kids naturally gravitated to me to “lead the way.” The above photo taken in 1947 at Camp Sonnikwa in the Adirondacks of New York State  (I’m in the middle with a broad smile and leaning to my right) captures what may have drawn people to me. Head cocked a bit and looking directly into the lens, I was always ready with an idea, or with a plan to move forward, or with an easy laugh. I enjoyed a fertile imagination from the earliest age.  I’m sure I was inspired by movies I saw at the Park Theater in the Strawberry Mansion section of Philadelphia, a hundred steps from our front door. Movies starring Superman, Tom Mix, The Lone Ranger and Tarzan filled me with images of men taking charge,  leading the way, saving the world or coming to save a damsel in distress. During this period I acquired the nick-name Joe-Joe the Iron Man; some close friends still call me Jo-Jo. If I had to guess, I would bet on my having come up with the name myself. This might have been the start of a lifelong predilection for naming things: groups, book titles, captions, themes, and titles for my photographs and short stories.

When my family moved from Diamond Street in Strawberry Mansion to the more suburban neighborhood of West Mount Airy, I became a serious gardener cultivating a half-acre plot behind my house. (This garden will be the subject of a future biographical entry). Around the age of 14, maybe less, I formed the Young Farmers Garden Mart. The goal was to find a piece of land, grow vegetables and sell them locally. I remember painting a sign with silver letters on a black background. The board I used was so small, it would have only attracted the attention of grasshoppers and mice. This group of about three other teenagers fizzled out when we were unsuccessful in finding a plowable site for our truck farm. But as they say: the fun was in the planning — nothing ventured, nothing gained.

The next stage of my growth as a leader came when I was a student at Perkiomen Preparatory School in Pennsburg, Pennsylvania, a boarding school forty-five minutes northwest of Philadelphia.  I was elected president of the Junior Class (perhaps based on my oh-so-modest campaign logo “Hitch Your Wagon to a Star.” The following year, I was elected president of the school.  At Perkiomen, I also took on the responsibility of directing a play based on Paul Gallico’s fine novel The Snow Goose. (This experience will also be the subject of a future humorous biographical entry). On another occasion, I  organized a group of students to decorate the gymnasium for a gala dance party, the likes of which the School had never seen. We installed a suspended ceiling of pink satin bunting, cast a concrete fountain in the middle of the basketball court, and lined the walls of the gym with 12 foot high heavyweight display paper on which we painted scenes of varying subject matter. This was my first foray into creating memorable party extravaganzas.

Later in life (I was maybe in my later 30s) the head of the Mayor’s Science and Technology Advisory Committee in Philadelphia appointed me head of the Urban Design Division. With this mantle and imprimatur, I created the Philadelphia Renaissance project, which, in essence was a city beautification program wedded to a day of block parties.

I founded the Architectural League of The Philadelphia Art Alliance and ran the League’s programs for half a decade. Our most dramatic and memorable event was the hugely successful Broad Street Comes Alive Exhibition, which attracted very favorable reviews and editorials in both of Philadelphia’s major newspapers. Around this time, I was appointed the chairman of the Buildings and Grounds Committee of the Pennsylvania School for the Deaf. 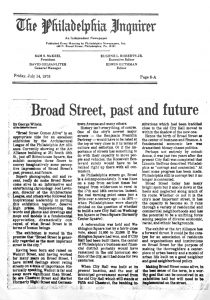 Not all my projects were successful. The Bicentennial Jamboree was an effort to celebrate America’s 100th birthday when the City itself failed to get a celebration off the ground. That project never got beyond the planning stage but the poster remains a lovely reminder. 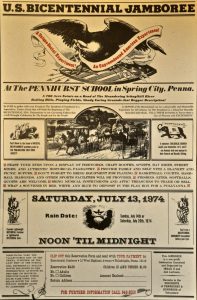 My efforts to create an Avenue of American History has had a checkered past. I was successful in forming a development group to move the project forward but the group was ultimately not successful in the United States. Azerbaijan recently expressed interest in the concept, so I remain hopeful. There iproject would be called The Avenue of Azerbaijan History.

SpaceGroup has been my most successful undertaking. Writing in 2019, the Group has been in existence for thirteen years and is still going strong.

Being a leader comes naturally to me. My spirits are almost always up, I have an easy smile, ideas come to me in abundance, I am motivated to engage with others to better the world, I abound in self-confidence in a way that is not off-putting. It helps to be above board, honest, respectful, but not shy about taking necessary actions that followers expect of a leader. I was raised in a way that caused me not to shrink in the face of authority and to follow, against all opposition, that which I hold be true or possibly true, subjecting that which may be true to a rigorous effort to prove what I believe in and to change my course in the face of clear evidence to the contrary.

Being a leader has enriched my life in countless ways. I feel as though I have generally contributed to the happiness and well-being of those around me and made good use of the great GIFT OF LIFE.