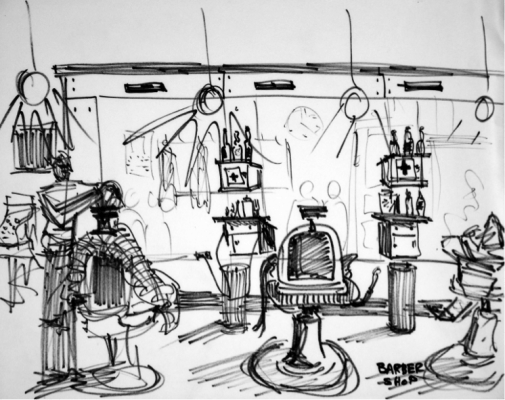 My son, Aaron, was in his early thirties when he flew to San Francisco twenty-some years ago to visit an old friend from Philly. After dinner they walked up a steep dark street in the Telegraph Hill neighborhood toward Rick’s house. While deep in conversation, Aaron looked past Rick into a shop window that was seemingly out of place in this residential neighborhood. The lights were bright in the small barbershop, the awning down, and the heavyset barber stood, back to the window, near a red leather chair supported by a white hydraulic base. His thumb was clipped into the waist string of his apron. In the lower left hand corner of the shop window was a sign: Haircut $5.00 “Wow, cheap!” Aaron thought.

The following morning, he headed back to Telegraph Hill to get a trim. He was certain that he was on the right street marked by its four story houses, but he couldn’t locate the shop. He tried parallel streets without success. Finally he noticed an old man wearing a baseball cap, pants hiked above his waist, leaning against a building on the corner of the street that he had walked up the previous night .

“Excuse me. I passed a barbershop on this street last night but don’t see it now. Do you know any barbershops nearby?” asked Aaron.

“No. I’ve been walkin’ around for half an hour and can’t find the place.”

“Well, there was barbershop on this street down where you’re pointing. But that was 20, maybe 30 years ago. I actually used that barber. Can’t remember his name anymore. Italian. Always wore a white smock.”

“Will you walk down with me and show me where you mean?” At first the old man hesitated and eyed Aaron with suspicion, but then the two strolled down the hill. They stopped in front of a house with a painted panel of plywood the size of a plate glass window. The two men shook their heads, said nothing, then parted.

Nothing similar has ever happened to Aaron since that “Twilight Zone” experience. One is inclined to ask: Was one or both of these men smoking something at the time? This is just too strange, too improbable, to be an accurate account of events. And yet…

Nearly a decade ago, Aaron heard about a group loosely associated with Princeton University. Princeton Engineering Anomalies Research (PEAR, for short), was studying the possible ability of the mind to influence machines. It was important that volunteers expressed no claims of psychic powers. Dr. Robert G. Jahn, one of the world’s foremost experts on jet propulsion, established the laboratory in 1979. Brenda Dunne, the laboratory manager, was a developmental psychologist. Aaron called to volunteer. When he mentioned his long term interest in Bell’s Theorem, which states: ‘No physical theory of local hidden variables can ever reproduce all of the predictions of quantum mechanics,’ Ms. Dunne paused for a moment then invited him to visit their laboratory. What Aaron encountered was well described in a NYT article that announced the closing of the laboratory in 2007. [There was] “…a gallery of random-motion machines and a variety of electronic boxes with digital number displays. Participants sit in front of an electronic box the size of a toaster oven, which flashed a random series of numbers just above and just below 100. Staff members instructed the person to simply “think high” or “think low” and watch the display. After thousands of repetitions — the equivalent of coin flips — the researchers looked for differences between the machine’s output and random chance.”

Aaron scored high in his ability to alter the random numbers generator. Worth noting is that each participant had a signature pattern associated with his/her results. Aaron’s signature was strong; that is to say that each round of his experiments had repeated similarities. For instance, he did 10 trials at 100 flips and when he thought even numbers or odd numbers the computer would reflect this correlation beyond what would statistically be expected given the law of averages. Jahn and Dunne were not trying to prove anything regarding psychic phenomena; they were merely collecting data even though, as Aaron puts it, skeptics have ‘long harped on debunking parapsychology.’ Aaron is a ‘scientific agnostic’ with his mind open to possibilities that seem improbable at first. His performance at PEAR came as no surprise to me as his mother has an uncanny paranormal sense of intuition. Perhaps genetics was at work here or maybe it was all just an eerie coincidence.

About 15 years ago I had an idea for a rain gutter that would shed leaves before they filled the gutter. The S-shaped profile of my gutter cap was oddly shaped and counterintuitive, but I had the sense it might work.   I built a scale model that proved water flowed as anticipated and suggested it would shed leaves sliding down the plane of the roof. While counting my millions in anticipated revenue, I received a call from a man in Chestnut Hill who needed some drawings for a concept he wished to patent. He asked me to first sign a non-disclosure agreement. When he identified his product as a rain water system, I said I couldn’t sign and explained why. Both of us had come up with the same idea almost simultaneously. Months later we saw ‘our’ product, Gutter Helmet, advertised by a manufacturer. The synchronicity was spooky to say the least.

I close with the following incident leaving the reader to wonder where all this may be leading. For the last seven years, a small group meets at my house twice a month to discuss science-related topics. We call our salon “SpaceGroup.” An occasional attendee is a biologist who works in a laboratory at Penn.   He is a ‘hard’ scientist with no tolerance for bunk. He surprised me recently when we were discussing quantum theory and theories of consciousness. He said he believed, along with many other scientists around the world, that there seems to be evidence for some extra-corporeal consciousness that unites all entities in the universe, both animate and inanimate. I don’t yet subscribe to this speculative notion, but I wonder what to make of reappearing barbershops, random number generators and the minds that can seemingly alter their randomness, rain gutter designs that concurrently pop into the minds of disconnected individuals, and young scientists inclined to consider a pervasive interconnectedness of all things in the universe. Who would have thought there were invisible things such as photons, pheromones, and radio waves flying around in the air? Aaron and I see ourselves as open-minded scientific agnostics. We consider the possible existence of things not yet seen and also feel compelled to always question what some regard as proven fact.