Faulkner and Beardsley in Black and White

Faulkner and Beardsley in Black and White 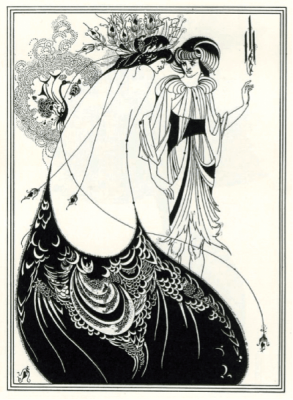 William Faulkner, the great American author from Oxford, Mississippi, is best known for his novels, short stories, plays, and poetry. So, naturally, I was startled a few mornings ago when I came upon several ink drawings by the author that were recently discovered in an obscure book (William Faulkner: Early Prose and Poetry) that was published before he turned twenty. His black and white Jazz Age ink drawings are startlingly refined and artful. They reminded me immediately of the superb works of Aubrey Beardsley, the English illustrator and author whose drawings it turns out had actually inspired the college-age Faulkner.

Born in England in 1872, Beardsley first emerged as a musical prodigy and child actor. At age 13 and poor beyond words, the self-trained artist began producing drawings and cartoons, which may have led to a short stint in an architect’s office in London when he was 16. Japanese woodcuts and the posters of Henri de Toulouse-Lautrec influenced greatly the look of his highly decorative India ink drawings. Beardsley worked in the then-popular Art Nouveau style using sensuous curving lines and bold contrasts of black shapes set against a white or yellow background. Just two years after the publication of Beardsley’s first book of drawings, he was the best-known artist in England. His control of line weight and his unerring decorative sense of style was masterful.

Beardsley was a controversial artist of truly audacious invention ‘renowned for his dark and perverse images and grotesque erotica.’ However, one should understand that the term grotesque in the world of art refers to images that are comically or repulsively ugly or distorted. Alternately, grotesque refers to a style of decorative painting or sculpture consisting of animal and human forms interwoven with flowers and foliage.

The pale, thin, stooped artist with sunken tired eyes and auburn hair combed forward over his bony forehead was nervous and fickle. He would satisfy contractual obligations only when the mood moved him. Obsessed with inventive composition and finely wrought drafting, he was a perfectionist of the highest order. Because he worked by candlelight in deliberately darkened rooms, one is driven to wonder how this chronically ill young man achieved the level of perfection he did. How did a human hand with such long thin fingers have such control? Today a computer could easily render the smooth curves, the delicate and precise line work, and the use of dots of varying diameter and spacing to render fabric and hair. But how was this achieved at the end of the 19th century?

Throughout his life, Beardsley’s private and public personae were characterized by eccentricity. The writer, H. C. Marillier, said of Beardsley, ‘Extravagantly praised and extravagantly hated, he worked in an atmosphere of exotic stimulus which was largely responsible for the eccentricities that developed…in his art and his character.’ Meticulous about his appearance, Beardsley routinely wore dove-grey suits, hats, and ties accented by yellow gloves and patent leather shoes. He once said, “If I am not grotesque, I am nothing.” Oscar Wilde once said that his friend, Beardsley, had a sharply profiled face like a silver hatchet. This stunning profile was captured with haunting precision by the great 20th Century English photographer, Frederick H. Evans. Evans is better known for his subtly shaded, black and white images of English and French cathedrals, but his finely ‘drawn’ platinum-print portrait of his friend, Aubrey, in 1893, is regarded as a masterpiece, a single print of it selling recently at auction for $15,000. In Evan’s memorable image, the artist’s thin fingers, extending up the side of his haunting face, are captured in all their telling bizarre elegance. Evans championed the work of Beardsley and the dramatist, George Bernard Shaw, both of whom were his friends and steady customers. But Beardsley’s sudden rise to fame just as quickly collapsed in blue-stockinged, end-of-the-century, Victorian England due to his association with the scandalous playwright, Oscar Wilde. Then, in 1898, Beardsley travelled to the south of France to recuperate from his life-long affliction of tuberculosis, but it was too late. At the age of 26 he was dead.

Faulkner learned well from Beardsley. Both artists rendered shoes and feet almost identically and the contrast of large black and white areas is notably similar as in Beardsley’s The Peacock Skirt, 1893 (above) and Faulkner’s Social Activities, circa 1920.   When black areas and white areas are not contrasted, as in Harry Clarke’s illustrations of 1919 for Edgar Allan Poe’s Tales of Mystery and Imagination, the results can be both graphically muddy and confusing in intent.

Author Philip Weinstein feels that Beardsley’s drawings were a part of Faulkner’s ‘budding pretentions—which included [his] claims to have served in the British Royal Flying Corps during the First World War, which he never actually did.’ Weinstein was wrong in this accusation because a biography of Faulkner indicates he did enlist in the Canadian Air Force in 1918 and served in active duty, eventually being commissioned as honorable 2nd Lt.

Even though Faulkner was discharged from the RAF the same year he enlisted, he periodically donned a military uniform and wore it to dances and even out on golf courses. His interest in fashion is particularly evident in his ink drawings. They are carefully rendered, sporty, evocative, and have the swanky élan of the Jazz Age. Weinstein goes on to report in his book, Becoming Faulkner: The Art and Life of William Faulkner, “. . . his expensive tailored suits had earned him the title ‘The Count.’ Eventually, however, his more elaborate costuming — replete with cane, limp, and swagger — elicited from his university peers the derisive term ‘Count No Count.’” Faulkner had a succession of jobs some of which ended in failure due perhaps to his reported use of alcohol. These included bookstore clerk, scoutmaster, and postmaster at the University of Mississippi.   Eventually, however, his career as a writer took off and his gargantuan talent in the world of literature was soon recognized.

Faulkner’s ink drawings are remarkable not just because of their graphic deftness, but because of his uncanny ability to capture gesture. An illustration of the wind billowing a topcoat exemplifies his talent at drawing the effects of the elements.   He succeeded in capturing the (fictional) personality of the people he illustrated; specifically their expressions, poses, and dress. It is not a surprise, therefore, to see that the storyteller in Faulkner was evident early on in his short-lived career as an illustrator.

William Faulkner was awarded the Nobel Prize in literature in 1962 shortly before he died. His acceptance speech, available on YouTube, is as surprising as his ability as an illustrator, but for a different reason. One expects a laconic sluggish Southern drawl with an ample dose of gravitas. Instead, a high-pitched voice with rapid-fire, dissonant delivery comes forth sounding akin to a LP vinyl record playing at 45 rpm.

It was important for both Faulkner and Beardsley to experiment frequently and give expression to their inner selves. They attempted various pursuits, failed at some and succeeded at others. They took creative risks, sometimes extreme, in a manner that is associated with creative personalities. It is interesting that fashion was important to both men as well as an element of pretense. As youths, they were quirky and searched within themselves until the essence of who they were finally blossomed into unadulterated genius.