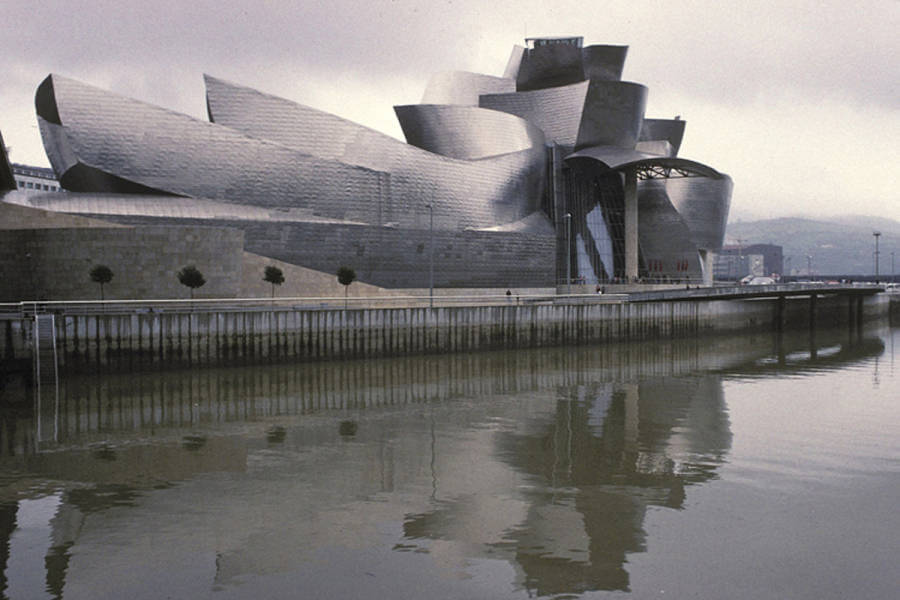 In 1998 on a trip to Spain, I saw Frank Gehry’s Guggenheim Museum in Bilbao (bill-bow as in bow-wow). I had seen photographs of the titanium, glass, and limestone structure in architectural magazines and regarded the building as a strikingly audacious and robust work of architectural sculpture.

I recall leaving our hotel well above the Nervion River on a bright October morning a year after the museum opened to the public. We stepped into the middle of a street that dropped away steeply toward our destination. The old stone houses and shops flanking the narrow street were mostly in shade. There below us at the end of the street was a brightly reflective, twisted fragment of shimmering metal that looked like a segment of a space ship that had crash-landed on the riverbank. There was no trace of a right angle. It looked like a loosely crumpled piece of silver foil fallen from another world, a world of wild dreams. My heart raced and our pace quickened as my wife and I raced down the hill, dodging cars and other tourists. The impact must have been similar to those people, 600 hundred years ago, who for the first time came upon a newly built Gothic cathedral, white and glowing in the summer sun of northern France, a tower of flying buttresses rising above the Lilliputian half-timbered houses in Rouen, Paris, or Chartres.

We thought we’d spend a few hours at the museum and then get on the road for another site elsewhere in Spain. But the beguiling, ever-changing views through our cameras’ viewfinders kept us glued to Gehry’s creation. The dazzling, titanium-shingled, crude but smoothly sinuous assemblage of colliding planes and contrasting materials were meant for celluloid. My concerns about a building that would likely require countless millions of dollars of repairs in the coming decades were displaced by sheer awe and seduction.

I was generally not taken by the museum’s interiors. In fact, a huge gallery that displayed Richard Serra steel sculptures actually repelled me and the bathrooms were so ugly I had to flee as soon as my hands were washed.

Because we could not tear ourselves away from its magical, ever-changing curvilinear contours, we stayed the night and awoke to an overcast, sometimes-drizzling morning. Before leaving town we decided to cross a stunning footbridge designed by Santiago Calatrava and look at the building from the far bank. What good fortune! The day before, the building was a dazzling object standing apart from it environs. But twelve hours later a moody gray sky, the reflective stillness of the Nervion in the foreground, and the supine silver body of the Guggenheim fused into one integrated tableau that united the components of the composition into one memorable composition -– a man made object wedded to the watery elements of the earth, the sky, and the river. Whether one likes all of Gehry’s work or not, the Guggenheim presents a powerful case for removing one’s blinders when it comes to design, and to dream with equal intensity about what could be, as well as what has already been done.