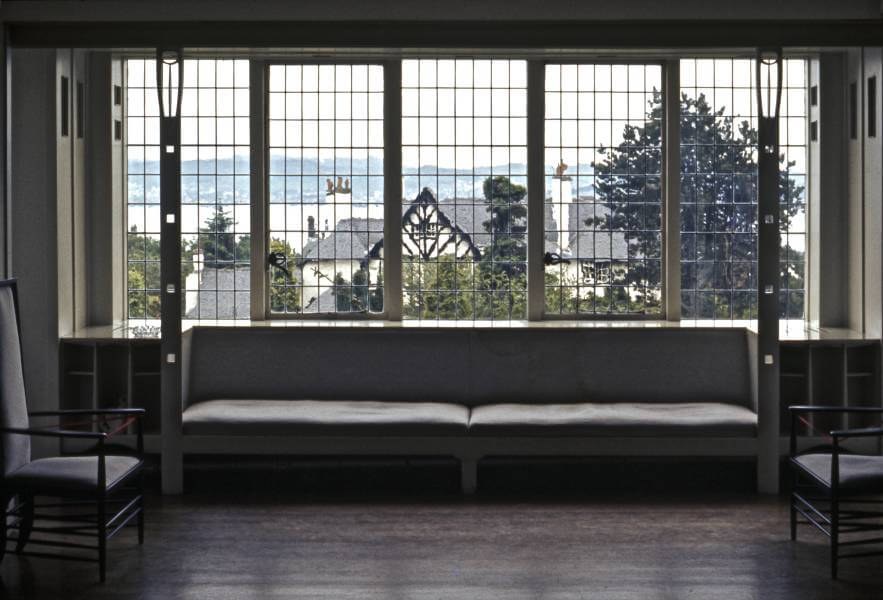 In 1973, my daughter, Julie, son, Aaron, first wife, Carol, and a babysitter named Ned Finkel traveled through England, Scotland, France and Switzerland. For all of us it was our first trip to Europe and not surprisingly an eye-opener.

I knew the works of the great turn-of-the-century early modernist architect, Charles Rennie Macintosh, but obviously had never seen his work. We were traveling south through Scotland after having failed to catch a glimpse of the Loch Ness monster, which Aaron was determined to see. It was near dinnertime and we were passing through the town of Helensburgh. At a stop crossing, I asked a policeman if he knew of any Macintosh buildings in the region. He said in fact the Hill House, one of Macintosh’s most famous creations, was just up the road to our left and it was just opening for the first time to the public but, unfortunately, not until tomorrow. We decided to at least look at its exterior.

At first it was something of a disappointment . . . gray stucco in a pebble-dash finish and surprisingly plain in a way being styled after Scottish castles. But there was a commanding presence about the building with clearly inventive and highly original detailing at every turn. I knocked. A caretaker from the National Trust came to the door. I explained I was an architect from the States and would not be there the following day. Any chance of just peeking inside? Astounded, we were invited in and it turned out to be the most career-altering experience of my life. Never before had I seen such detailing, inventive use of color, furniture designs that were wholly original and extremely sensuous. Left alone to tour the entire house, I even took a picture of the family sitting upon a built-in settee in the master bedroom. Today the image seems like a sacrilege.

In the living room, the subject of this photograph, the ceiling was painted black along with a band around the upper part of the wall. The effect was breathtaking. I could write a book about the endless number of extraordinary feautures of the house. To think that we had the good fortune to be the very first people to enter this Mecca of modernism is mind boggling. MACINTOSH IN SCOTLAND is my tribute to one of the most original designers of all time.