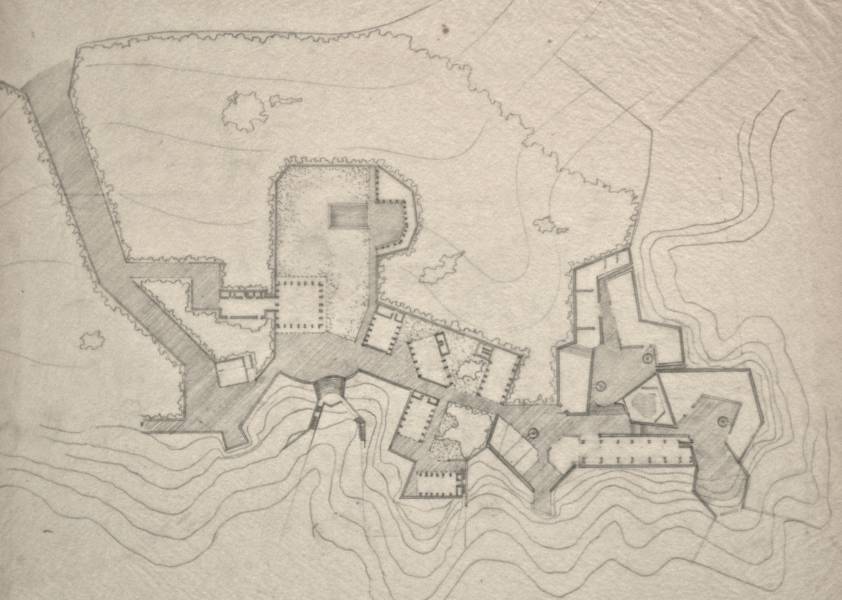 Sometime around 1960 my architecture class at the University of Pennsylvania was given an assignment to design a summer school for the Fine Arts Program at Penn on a hypothetical site on the southern coast of France.  I had not yet travelled to France, so site conditions and views for me were imagined.

This drawing, although untitled, represents I belive my first conceptual scheme for the assignment. It is not based on specific program requirements but more on a sense of what qualities I believed a summer school on the coast of France should embody.  As I look today upon the drawing, I am struck by the fact that many themes and qualities that have been evident in my work as a practicing architect are there in this early concept study.

First is my interest in procession, the experience of unfolding vistas and of exterior spaces first compressed and then expanded as one travels down the access road (upper left hand corner of the drawing) down into the little art village.  Another recurring theme in my work has been the frequent use of what I call outdoor rooms that include loggias, porches and colonnades. These are found in abundance in ancient Greek architecture and in the architecture of southern Italy.

What is also in evidence in this drawing is the pronounced use of diagonality.  Buildings are set at angles to one another and building masses are odd shapes responding to the flowing contours of the site. Although diagonality has only occasionally appeared in my actual works throughout my career, what is interesting is the fact that the idea of Diagonality became a central subject of research for me over more than a half century. I now have a website devoted to the Phenomenon of Diagonality in World Culture. www.centerfordiagonality.org

There is also an ineffable aspect of this drawing that has to do with unmeasurables such as good scale and timeless proportions. It is hard for a layperson to see this in a plan drawing but now looking back as a practing architect, I can see that I achieved some success in this respect in this early architectural drawing.

The original drawing as here illustrated had no color and was drawn as I recall on yellow tracing paper with an ordinary No. 2 Ticonderoga writing pencil, which I’ve used even for technical drawings throughout my career.