Poster for lecture at the Institute of Contemporary Art 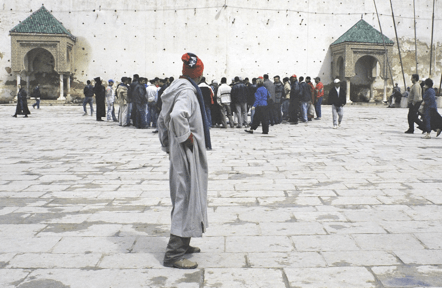 I opened the book for the very first time—randomly I should point out—to page 357. The book’s title: 1,000 Places To See Before You Die (a somewhat unnerving title for a man who is known to be fearful). My eye was immediately drawn to a small black and white image of porters wearing fezzes and baggy trousers standing in front of an elaborately detailed and alluring entrance to a hotel in Marrakech, Morocco.

I said to my wife, Janet, who had given me the book at Christmas, We’ve got to go there one day. I began reading her the short write up about Hotel La Mamounia that starts with a quote from Truman Captote. “Before you go to Marrakech, make sure you say goodbye to all your friends and draw your savings from the bank.” Capote must have been booked at La Mamounia and went on to say that “It is one of Morocco’s (and North Africa’s) most special hotels, the jewel in the crown of her many exotic hostelries. Built in the 1920s on the revered site of a sultan’s palace . . . it is a curious mix of Art Deco and traditional Moroccan.”

As an architect, my mouth was watering. There seemed to be an abundance of buildings worth seeing throughout the country. The write-up concluded with a comment about the restaurant, which said it was the best in the city, perhaps the country. “The open-air terrace lets in the sound of the fountains and the birds, while the scent from the garden mingles with the spices on your plate.” Even though I am not adventurous when it comes to exotic foods and unusual spices, the image beckoned like a women in love with beautiful dark eyes, Berber eyes, perhaps.

Even though Janet and I had agreed many times before that our next vacation would be to Prague, or Budapest, or Bosnia—or even Italy, again—and even though my comment about really wanting to see La Mamounia was made casually, Janet could still see the unmistakable glint of earnest longing twinkling in my small Jewish eyes.

Several days later we were booked and I was instantly unnerved. In fact I was in a downright panic. Traveling to an Islamic country in the midst of all the bombings and upheaval in that part of the world—that’s got to be insane! (It was 2004) I was only slightly relieved that I would be traveling with my gentile wife who uses her previously-married last name of Thomas, not Levinson. 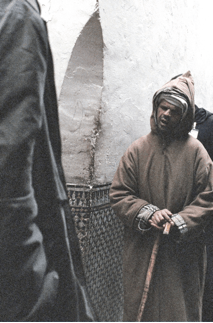 I was certain the terrorists, even blind ones, would be able to see right through my pants to my circumcised part, but then I recalled that they (the Muslim terrorists, of course) get circumcised, too. But a Jew in the land of terror! In the land of Al Quaeda! I was already terrorized and we hadn’t even received our tickets.

She had to be out of her mind to book the flight and I had to be out of my mind to agree to go. And it was not just the flight; it was a bus tour with strangers and with our friends, Allan and Marilyn. I wasn’t sure how much I wanted to travel with them given that Allan’s humor can sometimes go over the line. I could picture the scene: Allan joking around, me cringing, and them (the terrorists, in disguise) not getting the joke and suddenly knives and guns would be drawn and I’d be in the middle of an international event, a Live Report instantly broadcast on CNN.

Should I begin taking my Valium now or wait until a month or six weeks before we leave. I began rehearsing all the things I would say to save my Jewish neck, as well as Allan and Marilyn’s (but only after my own), rehearsing all the things that I thought were so clever, so humane but which, with more perspective I realized would do nothing but cause the terrorists to double over in hysterics before drawing their daggers from wherever it is they hide them in their baggy black outfits with the knee length blouses.

Night after night I went to bed reminding myself to call our ‘adopted’ Bosnian-Muslim daughter, Aida, in the morning to ask her for a wallet-sized picture of herself that I could show the terrorists to explain we were for Muslims, not against them. But, around midnight I realized that they wouldn’t speak English, so I began picturing the line drawings I would sketch to make my point. First a map of the Mediterranean with BOSNA printed in huge letters. But the terrorists read only that decorative scribble. Then I would draw canons and gunfire and stick figures of Janet and me pulling Aida to safety. And if my sketches failed to deter them, I would begin reciting sections from a novel I had written, based in part on Aida’s experiences during the war, that portray Muslims in a favorable light. But, Oh, Jeez, they wouldn’t understand English and I would probably be too damned scared to speak it anyway.

I’ll admit I had a few days to decide before the commitment to go was made. But I really didn’t want to look like a chicken. Besides it was a bus tour—that should be safe. But then I remembered the news story about how terrorists boarded a bus and immediately singled out the Jews and Americans for execution next to one of those huge tour-bus tires. Well, the title of the book was 1,000 Places To See Before You Die. So this was one dangerous place I would see before I die. I hoped I would at least get to see—and eat—at that damn fancy hotel in Marrakech before my throat was slit.

Janet wasn’t telling me (and she got Allan and Marilyn to swear also not to say) that Moussawi was from Morocco—and she positively spoke not a word about the recent bombings in Morocco. But, unaided, I thought back to that blurb in the book—now I fully understood what Capote really meant when he said to say goodbye to all your friends. As we began packing things for the trip, all I could I dream of was being dismembered.

One friend I did say goodbye to was our neighbor, Peter, who knew I was subject to anxiety attacks. With something of a smirk on his lips, he thoughtfully asked me whether I knew about the bombing of the Jewish restaurant in Marrakech where many were killed? He also mentioned Massouwi and some other treacherous goings on and wondered how it was we came to choose Morocco. I wouldn’t give him the satisfaction of saying Goodbye, so I said, See ya, and hoped that was a forecast of an event that would soon come true. Then he ended with: I’m sure everything will be all right. Whenever I hear that phrase I’m sure things won’t be all right.

Well, the weeks passed and much to my surprise my level of anxiety actually remained manageable, except that I then became nervous about whether I should by a pro-quality digital camera to bring along with my 35 MM film camera. Would I look (to the terrorists) like a rich American? Would my abundant camera gear be a flag with the lettering TARGET? I ended up not buying the digital camera but did pack 20 rolls of film and hoped the bus would stop long enough at any one place to able to shoot something worthwhile.

There were lots of other things for this neurotic soul to fret about—and I did. This is no joke—no exaggeration. After reading about how high and rugged the Atlas mountains are, I was kept awake at night worrying that the bus would break down on a narrow icy road and we would perish in the snow. I also tossed and turned with concern about having to wake up at four in the morning in order to see the sun rise over the dunes in the Sahara (this became a very frequent worry at bedtime—I hate to rise early). I pictured in vivid detail how the terrorists would show up from their camps in Algeria (How did Morocco actually close a border miles long in the desert? Who were they kidding?) and do us in before sunrise. What would it feel like to have sand kicked over our bodies—our corpses lost in no-man’s-land forever.

And what about scorpions? You positively couldn’t see one of those little sand-colored buggers before sunrise; they’re barely visible in the daylight. I was bitten by one in Jamaica (or it might have been a centipede) and I was damn lucky to find an American doctor in the middle of night who charged me $200 for a shot in the ass so that, I was told by our Jamaica ‘daughter,’ the poison did not migrate to my heart. I’d bring a flashlight! But I couldn’t hog the beam. Just when I was chivalrous and shining the light in front of Janet’s path through the sand, one of those little buggers would be up the inside of my pant leg in a jiff and I’d be dead before the camel got me to the dune to view sunrise the way I remembered it’s slow and breathtaking ascent from David Lean’s cinematic masterpiece, Lawrence of Arabia.

All this aggravation for La Mamounia. Why, I kept asking myself, had my finger slipped into that particular page. Why had it not found the section on Scandinavia—that’s a safe place to visit and I’ve never seen a veiled woman in Oslo.

And of course I worried about the spicy foods and thee sanitation. But then—I did like lamb alot! But if I ate only lamb, I’d be constipated for nine days. And what about those little cups of coffee so thick and rich you can barely twirl your spoon. I don’t even drink coffee! Or is coffee what they drink in Bosnia. Would I find Coke machines with bottled water, or even just Coke? Would I be forced due to the heat to drink the local water in certain locations?

We all know about the water in third world countries. DIARRHEA!!! What do you do about diarrhea in a bus traveling in the desert or through a narrow pass. Where could you hide and squat—and how do you keep the mess off your legs and your pants if they’re bunched up around your ankles?

Was there time to back out? And one more thing: the tour instructions said to pack light. I’ve never packed light except the time I tossed some underwear in a SuperFresh grocery bag for a trip to Jamaica when I was a dirt-poor hippie with a Nikon. What if I had a heart attack lugging my huge suitcase and camera bag in and out of the bus or a hotel, like I thought was happening to me in Spain several years before? Do they have modern hospitals in Morocco? I’m just not cut out to travel. Perhaps a prayer would help. But what god would listen to a prayer from an atheist?