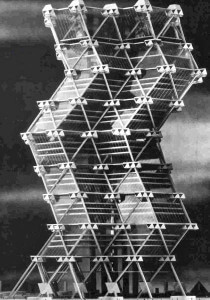 The right angle has dominated structural, decorative and spatial motifs since the beginning of recorded history, particularly in architecture.  As the 19th century ended and the 20th century began, Diagonality flashed onto the cultural landscape with dramatic vitality. When the benefits of this powerfully enabling geometry were discovered, it became a lasting addition to the sourcebook of architectural and engineering forms.  The phenomenon of Diagonality has permanently changed the course of art and architecture and promises to do so into the foreseeable future.

As an architecture student at Penn (1957-1963), I observed a curious trend in the designs of my professors (Kahn, Venturi, and Giurgola), a trend explored in the work of fellow students. Triangular shapes were added to and subtracted from otherwise rectangular plans producing buildings that were, in one way or another, out of square.  These modifications were referred to as zaps and zoots, a development later dismissed as a passing fad.  My belief, however, was that these angular forms were part of a potentially more lasting revolution in the world of design.  Triangulated space frames, polygonal mega-structures, and a host of other revolutionary angular design developments were challenging the centuries-old staid geometry of the right angle.  A daring dynamism and spatial complexity was changing the face of architecture and other design disciplines.

Today, Diagonality is the architectural motif de rigueur; it appears in important buildings and engineering structures worldwide.  However, the term Diagonality is rarely employed in professional books and journals.  How was it possible that such a transforming geometry could have emerged in such a voiceless manner?  Due to the fact that diagonals and other angular relationships continue to find bold expression in the 21st century with increasing vigor and conceptual daring, it seems appropriate now to discuss this phenomenon beginning with antecedents in ancient Egypt and then tracing its evolutionary development through succeeding cultures and later centuries.

THE DARING DIAGONAL: Architecture, Geometry, and the Impact of Revolutionary Thought, is the result of an investigation I have carried out over many years.  I’ve endeavored to probe the impact of Diagonality on contemporary culture and reciprocally, the impact of the culture on the phenomenon. This theory unites disparate movements usually associated separately with early 20th century design such as Cubism, Futurism, Vorticism, Constructivism and, somewhat later, Deconstruction.  My treatise weaves together these and other movements, as well as subjects as diverse as cognition, religion, science, mathematics, cosmology, military fortifications, and perhaps most provocatively, social revolution —weaving them into a broad conceptual structure under one morphological umbrella that illuminates the geometric foundations of the built environment.

Architects around the world have generously sent me photographs and plans of their work along with constructive comments about my thesis.  Their encouragement and interest in this as yet undeveloped topic have led me to conclude that this will be a welcome study attracting a broad audience.

Periodically, I will be posting chapters of my book.
1. PREFACE
CHAPTER 1: Introduction