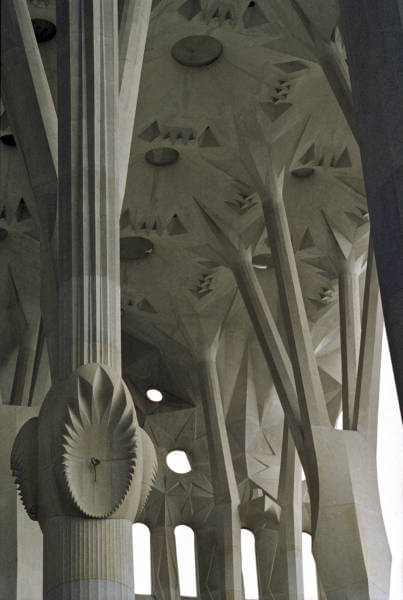 Although I have had the privilege to know or meet a handful of the 20th century’s great architects, furniture designers, and landscape architects such as Louis Kahn, Robert Venturi, Philip Johnson, Fernando Caruncho, Wharton Esherick, and Frank Lloyd Wright, and have already written about some of them in the Local, one of my true favorites is the great Spanish architect, Antonio Gaudi, who died twelve years before I was born. Gaudi was a fabulous artist in many modes of expression and was a talent of prodigious and original out-pouring. Many of his architectural works, furniture designs, and tile ensembles look, shall we say, extra-terrestrial. It should be obvious that today’s fanciful building designs by architects such as Zaha Hadid owe a lot to the rule-breaking, dream-like architecture of this Spanish master. Frank Gehry, another world-renown architect, has specifically acknowledged Gaudi’s influence. But as is often the case with artists ahead of their time and/or with a startlingly unorthodox vision, Gaudi’s work was not always revered. After his death his worked was dismissed internationally as too baroque and excessively inventive. Regrettably, his primary workshop was ransacked and largely destroyed during the Spanish Civil War, but his reputation began to find new appreciation beginning around 1950, shortly before I entered Penn’s School of Fine Arts.

Gaudi, the leading light of the Spanish Catalan modernista movement, was born in 1852 and died in 1926, run over by a trolley car on his way to confession. Because of his shabby clothes, he lay in the street, thought to be a beggar. Never married, he was a deeply religious man (Roman Catholic) and in his last years he lived inside his workshop in La Sagrada Familia cathedral, a vast, sky-piercing building that is still under construction in Barcelona. (See photo). He was a reticent and reserved man, often in bad health, suffering from rheumatism and almost dying from tuberculosis. Nevertheless, he devoted enormous energy to projects associated with his faith, but is also well known for his fabulous house designs such as Casa Batlló with its curving dinosaur roof. His personal style emulated natural forms such as Casa Milà, an apartment house with a rippling façade that looks like it has been eroded by sea waves. In the attic of the building I remember marveling at an exhibit of several Gaudi models and unique engineering studies consisting of glass shards hanging from strings in an inverted mirror image of the structural forces.

It is one thing to see images of Gaudi’s work in art books, but something entirely different to experience the actual buildings. The sheer power of his creativity is impossible to capture on a printed page. He was a master of construction, engineering, architecture, sculpture, ornamental iron, symbolism, natural light, geometry, organic form, stained glass, cabinetry, and tile design. In short he was the consummate artist and it is critical not to look at Gaudi’s work too quickly. There is so much depth and intricacy to what he produced that a fleeting glance will only yield a dazzling superficial impression, and much will be lost.

Profoundly inspired by natural forms, which he studied in situ, Gaudi’s work is organic in ways that Frank Lloyd Wright may only have dreamed about. While Gaudi worked largely in curvilinear forms, Wright’s work was for the most part dominated by the orthogonal grid (right angles) and sharply angular forms. Wright did use curves at times but these did not have the non-Platonic freedom of form we see in Gaudi’s creations. Like Wright, Gaudi was deeply influenced by the arts of the Orient. Actually he was a fanatical student of all historic trends and was particularly inspired by Gothic design and the mystical and enchanting spatial arrangements and complex tile work of Moorish architecture, such as the Alhambra in Granada, Spain. The modern environmental green movement likely appreciates his reuse of waste ceramic shards, a technique called trencadis. These broken fragments are inserted in masonry and stucco surfaces with stupefying originality.

Like Frank Gehry (architect of the Guggenheim museum in Bilbao, Spain), Gaudi preferred three-dimensional scale models to drawings. What Gaudi didn’t have, of course, was a computer, so his achievements are all the more mind-boggling in light of their surface intricacy, geometric complexity, and buildability. Also like Gehry, Gaudi relied upon other architects that worked for him to help design his projects and carry them out. Those assistants regarded him as pleasant and polite, but others saw him as gruff, unsociable, and arrogant. Similar to many men of super-human talent and drive, probably both depictions are true.

Of course it doesn’t hurt for an architect to have a few wealthy patrons. In Gaudi’s case it was the Church and the Catalan industrialist, Eusebi Güell, who first saw the potential of Gaudi’s creative genius in a showcase the young designer exhibited at the Paris World’s Fair in 1878. For Güell, Gaudi designed wine cellars, a palace, a park, several pavilions and the crypt of a church. All are breathtaking! I took numerous photographs of Gaudi’s work and I am currently seeking a venue in Chestnut Hill to exhibit them. Even if I am successful in arranging an exhibit, I urge you to book a flight to Barcelona for the first time and even for the second or third time. You will have the pleasure of seeing the works of an extraordinary creative force.
In closing, I should mention that Gaudi was not a good student and failed a number of courses. But someone must have seen a spark of something because upon his graduation from the Barcelona Architecture School, the institution’s director, upon handing Gaudi his diploma said, “We have given this title either to a fool or a genius. Time will tell.”