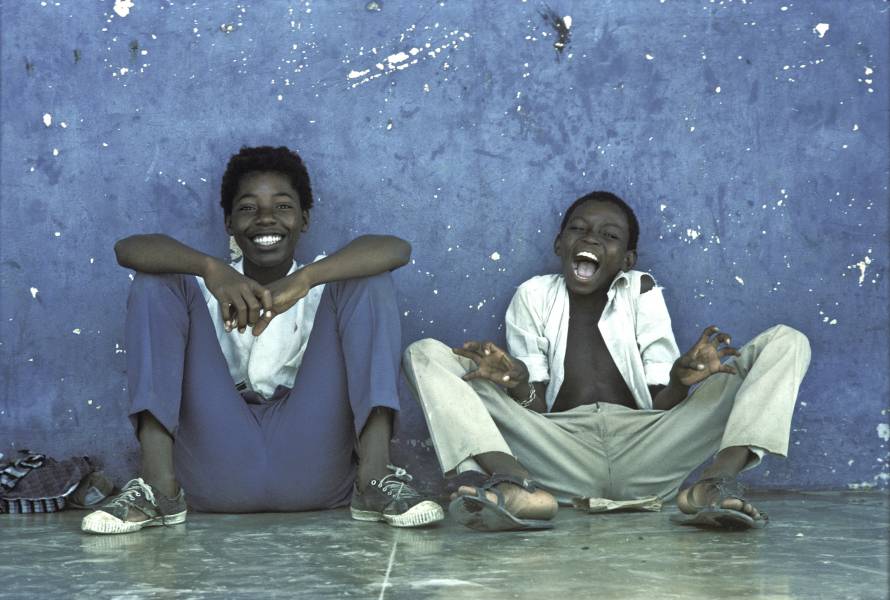 I was walking through the rough and tumble fishing hamlet of Savannah-La-Mar in 1975 on my initial visit to Jamaica. It was an island I would return to about fifteen times after that memorable and life-altering first vacation to the Caribbean. My treasured Beseler Topcon was strapped around my neck as my wife and I were wandering aimlessly through the back streets of Sav when we approached a porch with peeling blue paint. Two boys were sitting in the shade and in an instant that I wish I could summon again for closer inspection, my camera came up to my eye as the Boys broke out in an irrepressible and memorable explosion of free-spirited joy. Did I have time to compose, to focus, to do anything other than shoot and capture one of my finest photographs? Who knows? It’s just as possible that pure instinct governed my actions, as did the possibility that I captured the shot as a result of a series of quick and deliberate technical decisions. My Topcon had behind-the-lens metering, one of the first 35 MM cameras to offer that feature, so I know I didn’t need to concern myself with that technicality. Sadly, however, my black and silver Topcon Super D—with its huge, super-sharp lens—was stolen in a house robbery some years later. Although I don’t miss its boxy shape, I always wonder whether the optics of my subsequent Nikons ever matched the perfection of my Topcon’s marvelous assembly of glass lenses.

On subsequent visits to Sav, I took with me prints of the photograph to give to the ‘Boys’ and even a small appreciative cash gift, but no one on the streets we wandered recognized them. It’s quite possible they didn’t actually live in Sav but rather came in from the hills for a day of adventure.

A day or two before my mother died in 1993, she beckoned me close to her bed at the Willow Lake senior center and whispered her request that I bring the framed picture of the Boys From Savannah-La-Mar to hang on the wall opposite her bed. For the living and the dying, the photograph provides a spirit-lifting message, one that would be reassuring and comforting as the final energies of life drain from the body and the mind. My mother was always one who did things for the disadvantaged, the poor, and the needy. Perhaps this photograph was her way of leaving the world looking over toward a few smiles that would say: Lydia, you brought me happiness when it was needed.