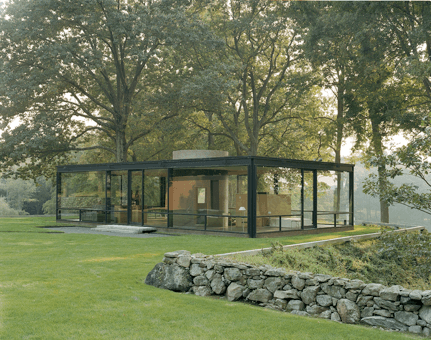 World-renown American architect, Philip Johnson (1906-2005) graduated Harvard with a degree in Philosophy in 1930 and that same year, at age 24, became the founding director of the Department of Architecture at MoMA in New York.   Four years later he returned to Harvard to study architecture. In 1945 he began designing a home for himself on a 47-acre idyllic site in New Canaan, Connecticut. His Glass House was completed in 1949 and quickly became an enduring icon of Modern architecture.

Sometime after I turned 14, which is when I decided to become an architect, I saw Johnson’s Glass House in a magazine. The cold, industrial look of its severe shoebox design repulsed me. The house consists of a single room of 1700 square feet with floor-to-roof glass walls set in black-painted thin steel frames. A small but luxurious bathroom and a living-room-facing fireplace are neatly shoehorned into a freestanding brick cylinder.

My first reaction to the Glass House is understandable because back then I was something of a ‘farm boy’ at heart. I had grown up on a treeless street in a row house apartment in Strawberry Mansion before the family moved to a stone twin in what felt like the suburban ‘countryside’ of West Mount Airy. Not surprisingly, I was more attracted to the organic, earth-anchored architecture of Frank Lloyd Wright and to a series of warm, natural House Beautiful homes designed by Alfred Browning Parker. Interestingly, when Johnson was a kid himself, his mother wanted a house designed by Frank Lloyd Wright but Johnson’s father said no. So not surprisingly, when I began studying architecture at Penn, what lighted my soul were stone fireplaces and natural wood. Concrete buildings by Le Corbusier and lyrical designs by Alvar Aalto also inspired me. Then came a class trip to New Canaan to visit—ugh!—Johnson’s Glass House.

I still remember that first moment strolling along the pea gravel path (as manicured as a movie star’s fingernails) when the Glass House came into sight. It presented itself three-quarter view as one comes upon a Greek temple. I was instantly smitten. The pavilion was stunning in its simplicity, exuding a machined elegance I had never before experienced. The scale of the house was perfect for its setting and the refined detailing was to die for. A single ten-foot high glass door was centered on each of the four exterior walls. One door suddenly opened and Johnson stepped out onto a thin granite landing and then down another step to greet us. He was self-confident, humorous, perhaps a touch impatient, sharp-tongued, and patrician. I was in the presence of an architectural god.

Walking into the house was like walking into a new and foreign world, much closer to heaven than earth. How was it possible that something of so little materiality could be so transporting and uplifting. The emptiness of the room was exquisite (the same quality that had repulsed me in that magazine years before). The perfectly clean glass walls were invisible, which heightened the transcendent experience of being in a heavenly realm. I remember looking through one wall of glass at a wood sculpture that looked slightly like the skeleton of a giraffe, grey from natural weathering and ‘painted’ in places with a patina of green moss. The work of art was a stunning textural contrast to the refinement of everything inside the house that sang of sleek sophistication. The floor was cordovan-colored bricks set in a herringbone pattern, the surface waxed to perfection. What little furniture populated the space was sublime; how else to describe Mies van der Rohe’s chrome and leather Barcelona chairs and chaise sitting on a perfectly proportioned area rug square in the middle of the room. An unexpected but welcomed note of historical contrast in all this uncompromising modernity was a 17th century landscape by Nicolas Poussin. But then it dawned on me! The house was not a room; it was a space; the very quality that transforms buildings into architecture. What was most stirring was feeling you were at once both in a house and also intimately part of a dreamlike Connecticut landscape. The memory still gives me shivers. http://philipjohnsonglasshouse.org/history/buildings/glasshouse/

In March, 1959, while still at Penn, I wrote to Johnson requesting an internship. He wrote back saying this was not feasible but added if I wanted to see the house again he would be happy to arrange for my visit. Johnson is well known for giving of his time to mentor aspiring young architects.

The Glass House (now open to the public) was mine to see free of the distractions of fellow students and professors. Again I had that feeling of floating as I stepped inside. Philip was willing to answer questions about actually living in a glass house (seeing dishes in the sink – there were none – and sleeping through a noisy thunderstorm). He pointed to what he called the Brick House nearby where he confessed he retreated most nights to actually sleep. He then walked me over to his uncluttered stone top dining table where he had been sketching the profiles of the bronze and shellstone façade he was proposing for the Amon Carter Museum in Forth Worth. His concern was the way shadows would play on the sensuously profiled columns of the Renaissance-styled front loggia. Where, I wondered, were the crumpled balls of sketch paper; after all this had been the age before computers did paperless drafting.

In the early 70s, Murray Isard, (my father-in-law) began negotiating with Johnson for the design of a multi-use complex on the B. F. Parkway (never built). He showed Johnson photographs of my early houses. Johnson, who probably forgot he ever met me, probably had no choice (under the circumstances) other than to say he liked what he saw but asked to see drawings, not just photos. It was good to be nudged to do a series of ink drawings that I should have done years before.

Roughly 10 years later I visited Louis Kahn’s masterpiece, the Kimbell Art Museum in Fort Worth, Texas. Here was architecture also at its most sublime, a design seeded in the soul of a real artist. I had forgotten Johnson’s Amon Carter museum was also in Fort Worth; in fact it was at the end of the park in which Kahn’s concrete and travertine multi-vaulted masterpiece stood. I would finally see the building Johnson was designing when I visited with him in the late fifties. Once there, I wondered how was it possible that the architect that created the Glass House could also produce a design that seemed nothing more than a predictable façade fronting some very conventional rooms. The staircase in particular was totally uninspired. So Johnson was not a god after all! Like all great talents, he nailed it on some occasions and fell short on others. Johnson speaks candidly about his life and the route to becoming a great American architect on many internet sites such as: http://www.achievement.org/autodoc/page/joh0int-1.

As the videos will prove, Philip Johnson was a delightful character, hell-bent on finding the next trend, and therefore more derivative than a trail-blazing innovator. Although the Glass House can be traced to works by his mentor, Mies van der Rohe, it will live as a testament to a man of exquisite taste and high standards. For me visiting him and his glass pavilion was a career-altering experience and I will always be indebted to my gracious host and mentor-at-a-distance.