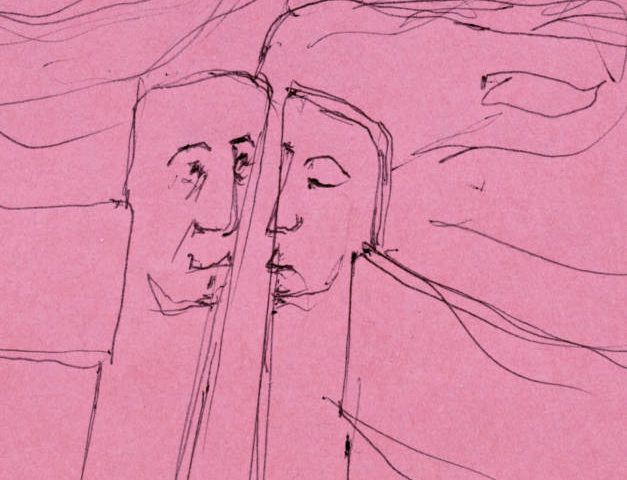 I REALIZED THIS MORNING (June 10, 2018   4:55 AM) that my closest friend is not another person but truly my sub-conscious.  I was lying asleep this morning, but awake enough to be engaged in a serious  “conversation”  with my subconscious.  I sometimes do that halfway through my eight hours of sleep.  It is truly a conversation between two parties.  My subconscious works at lightening speed feeding me a stream of ideas that I  consciously evaluate, still with my eyes closed — but this dialogue is definitely a conscious act.  I and my subconscious (I’ll call him Howard – my middle name). Anyway, Howard and I were engaged this morning in a dialogue about all that went into the design, construction, and experiencing of my Hillside House (the Rose Residence), which I am writing about for the book THE HOUSES OF JOEL LEVINSON, that is currently under development by the Architectural Archives of the University of Pennsylvania.

When I decided that I would not be able to fall back into a deep sleep because the rush of rich thinking was too compelling to shut off, I decided to get out of bed and write down my thoughts.  It was at that moment, rising out of bed, that I realized I actually consist cognitively of two parts, almost two people, but certainly two cognitive entities.  There is Joel, that wily, sometimes manipulative, conscious thinker and Howard, that incorruptible 24-hour-a-day-and night tireless investigator: the source of all my creative thinking and enterprises.  On one hand, Joel is the tip of a huge cognitive iceberg; he is oftentimes not to be trusted, while Howard is the silent partner, the real brains of the operation, the information supplier par excellence, the party really in touch with all underlying realities.  In fact he is the maker of those realities, the library of all information whether used or not in my daily activities.  On the other hand, Joel deals with what’s in focus, the task at hand, achieving the emerging goal by means honorable, most of the time, but on rare occasions not.  Howard deals with a million realities not all willing to reveal themselves, certainly not all at once, while Joel thinks and acts to cross the street, pursue the skirt, draw the line this way rather than that, utter the word charitably or critically, apportion the ingredients for the cake by instinct.   Joel gets spurts of input from Howard…almost always in the cognitive and creative shadows.

But this morning, Howard stepped out of the shadows. The integrated personality that I usually am, formally introduced us — and I, Joel, recognized my closest friend for what he/she/it is.  What a revelation.  What a welcomed acknowledgment!

That is not to say that Marty Lozanoff, the man who has become my best friend, is in any way demoted.  He and I continue to share common perspectives, explore matters with a similar temperament, trust one an-other’s truths and guidance, reach into and explore cosmic worlds unseen, and never have had occasion to be disrespectful to one another even though we are almost always brutally honest.  In fact, I suspect we help each other in revealing the other’s hidden side, the bottomless well of the subconscious and its countless billions of neurons firing and connecting at lightning speed — a treasure trove of rich insights.

My son Aaron is likewise my best friend but our relationship is complicated by our father/son history, genetics, a competition of sorts mixed with an ever-evolving and deepening love.  AA and I roam the hidden worlds of reality, art, and perception and countless other subjects too numerous to name.

This morning, I now feel freed and empowered by consciously/formally acknowledging Howard as my cognitive shadow, or me, his cognitive light. Whichever is true or both, we are always together except in deep sleep, during which time he carries on, sorting it all out but packaging it into infinitely complex layers for me to utilize as I see fit at any particular moment.  By necessity, I am almost always the executor while he remains the whisperer of realizations I can take or leave at my peril or to my advantage.  But Howard is always there to take action to keep the factory of my body working as it should.  Sometimes he jumps the gun and saves me from harm.