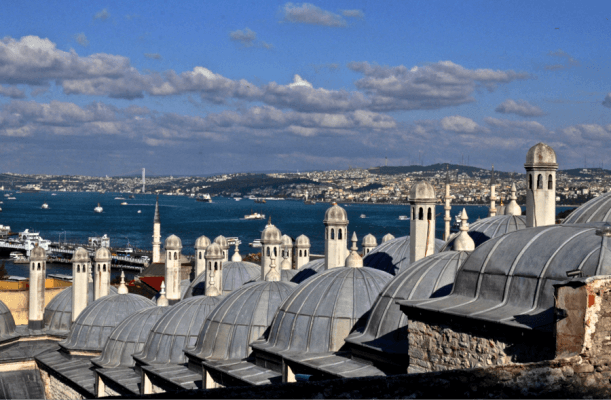 That was the reaction from almost everyone I heard from when, in September of this year, I said I was leaving for Turkey at the end of the month. I had planned the trip months earlier with a friend, long before there was a serious threat from ISIS. During the ensuing months all hell broke loose, not just in Syria but all across Iraq. I had read that 15,000 Jihadists were flying into Turkey from all over the world, a number that included a few hundred from the US. As the months passed, my friend and I concluded that we had made a huge and dangerous mistake. So, we kept checking travel advisories, watching news reports, and calling our tour company about trip cancellations or even deaths. NOTHING: no words of caution.

Friends who were then travelling in Turkey said they were having a great time; “make the trip!” Nevertheless, I kept re-reading our trip cancellation policy written for lawyers perhaps able to decipher the meant-to-confuse gibberish. My former employee, Ozkan Karababa, who now had his own architectural practice in Istanbul, said “I see nothing to worry about.” I figured he was either lackadaisical or just didn’t want to scare me into not visiting him. Another architect friend of mine living in Ankara (I hadn’t seen Kemal Aran in 54 years . . . since we studied together at Penn) said he had heard reports that certain mullahs were giving money to local kids to go fight with ISIS, but he didn’t say, Don’t come.

During the week before we left and following a call to our tour company (Gate1 — headquartered in Fort Washington), I wrote my internist requesting a letter saying I sometimes suffer from anxiety, and a trip to Turkey in the context of the world situation could be a problem for me. When I learned a few days before we were to leave that I needed to be actually hospitalized in order for the trip cancellation insurance to kick in, I girded up my loins and, together with my friend, decided to go (actually, our final decision was made the morning of our flight).

Once on the plane, I searched for suspicious looking bearded men hell-bent on mayhem and then had trouble falling to sleep. However, later, when I walked up and down the dark aisles to stretch my legs, those still awake were scrutinizing me with concern, looking at my beard and the weird look in my eyes.

I truly imagined that our tour bus would be the only bus in Turkey and men in long black shirts would be hiding in toilet stalls at every rest stop waiting for . . . ME. I even rehearsed a spiel about how I had ‘adopted’ a young Muslim woman in 1996 right out of the war in Bosnia and that I had written a novel (The Reluctant Hunter) from the Muslim perspective. But what good would these facts do when face-to-face with brutal killers in a toilet stall.

Soon after we landed, it became quickly apparent that there were hundreds of thousands of tourists from all over the world, all looking happy and eager to see the sights. After we checked into our hotel in Istanbul, our mood quickly changed and our fears evaporated. I unpacked my camera and we took a delightful afternoon stroll to check out several nearby mosques. The streets were filled with people either veiled or wearing jeans and jewelry — Turkish, Chinese, and American. (Note: At the airport I saw women, totally veiled save for their eyes, shopping in Victoria’s Secret) As we walked, there were calls to prayer wailed from loudspeakers (I would have much preferred human voices unaided by technology). In every direction sky-pointing minarets reached toward heaven. AT LAST, a country I had always wanted to visit was finally beneath my feet. For our first meal we sat in an ancient high-columned porch overlooking a fountained courtyard and laughed aloud as we guessed what we were ordering in Turkish.

We spent 15 days in the western half of Turkey, the portion that projects over the Mediterranean. The eastern half sits over Syria and Iraq and thankfully we were nowhere near that hornet’s nest. The closest we came to the conflict was to see refugees on the streets of Istanbul, squatting on sidewalks, women’s head covered in scarves, little cardboard boxes set out and hoping for a few coins. I took seven thousand pictures on the trip: some of the refugees and many out the windows of our tour bus. Our Turkish guide was a heavy-set, well-spoken man who had lived in California for more than a decade. He was very knowledgeable and a school buddy of Turkey’s current President, Recep Tayyip Erdogan. Sali (our guide) thought well of Erdogan and it is true the president is doing wonderful things for the economy; everywhere there are tall cranes silhouetted against the sky. But young people we spoke to were not happy with some of his backward looking, conservative policies and his dictatorial way of ruling. They said they wanted to emigrate to the US. This was also the sentiment of, Ozkan, my Turkish friend.

Politics aside, Turkey is amazing! The Hagia Sophia mosque, originally a basilica and now a museum, is being restored; it is all that it promised to be in my art history books. Halfway through our trip my friend and I suppressed our fear of heights and went 2000 feet up in a hot air balloon into a dark, pre-dawn sky. As the sun rose, the view over the surreal terrain of Cappadocia provided sights and photographs that will forever stir my soul!

There’s not room here for a full report of the trip, but I’ll close by saying that sitting one story above the street in a roofed-over, open air restaurant in Istanbul enjoying a fish, netted fresh from the Bosporus, was a memorable highlight for me. Just the name, Bosporus, brings to mind centuries of cultural interchange and revolution, romance, political intrigues, business deals, tourism, the Silk Road, and burgeoning industry. Our restaurant was on the western bank, which means we were in the European corner of Istanbul. But we looked across the river to the eastern side of the city situated in Asia (see photo). The river was alive with boats filled with commuters and tourists, chugging tugs steering commercial ships, and even old world, many-masted sailboats. Don’t think twice about booking a flight in the right season. If you see just a fraction of what we saw of this rich and ancient/modern country, it will have been worth it.