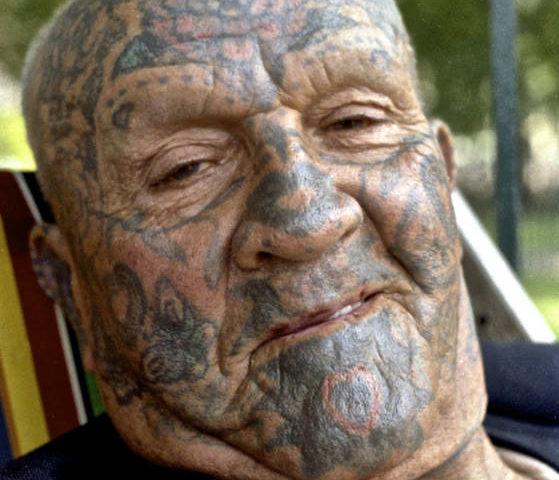 Jacobus van Dyne was on Speakers’ Corner in Hyde Park in London in 1973 when my family strolled up to see and hear what this tattooed man had to say. My son Aaron, then about 10 years old, was all ears when van Dyne said he had been a gun runner and bootlegger for Al Capone in the 1930. Aaron was so interested in criminals at the time he could have written an encyclopedia based on what he had researched.

Van Dyne was born in South Africa in 1896 and was tattooed by the great George Burchette. Burchette said that van Dyne bragged he had been in every famous prison in the world. He is said to have worked as a stevedore on the Southampton Docks most of his life before he died in the 1980.

Van Dyne had no objection to my taking this portrait, which shows in detail the richly pattered tattoos including that of the Zodiac that Jacobus reportedly largely designed himself. His entire body, including his penis, was tattooed but his head from the neck up was his favorite area.