THE LAST TO STAND

WildWood – A Miracle of Survival

THE LAST TO STAND 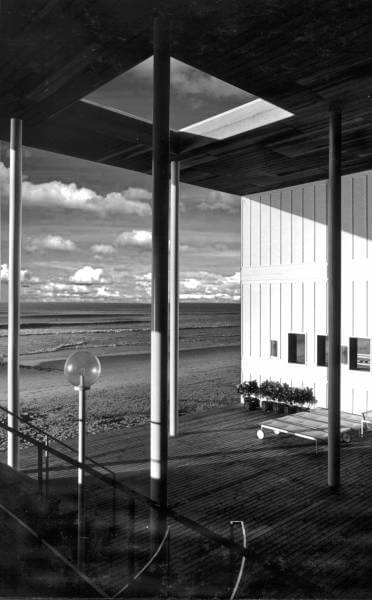 IN EVERY CORNER of the universe, there are forces lurking that will undo whatever was done before; forces will destroy everything created in a preceding epoch.  Even though protons are supposed to last for 1033  years, nothing (as the saying goes) lasts forever.  Over time, everything returns to the most elemental form of ‘cosmic dust,’  or as physicists might say, to some elemental force field.  All that is living and all that is inert must resist a multitude of forces that will unravel that which was previously and miraculously brought into existence.

As an architect, I was taught how to design buildings that would resist the forces of nature: the rotting, molding effects of rain; the convulsions of an earthquake; the ripping effects of a windstorm; the rusting effects of oxygen; the eroding effects of pollution; and unanticipated structural loads that will bend beams and twist columns, causing them to ultimately yield  to the most fundamental force of all — gravity.

What they didn’t teach me at the University of Pennsylvania’s School of Fine Arts — didn’t even mention — was how to design a building that would resist (if feasible) the economic hammer blow of the almighty dollar.  Why report this?  Because I recently came to learn that a year-round beach house I designed in 1968/69 in Margate, New Jersey — a house I designed to resist the most destructive hurricane imaginable — would ultimately be brought to its knees, not by the wild forces of wind and water, but by an unimagined foe from another realm: the changing value of real estate.  The following email I found in my inbox a few days ago tells the story:

Hello Joel,
I am an Architect in Atlantic City. This past weekend my wife and i [sic] got a chance to see the beach house you did on South Mansfield avenue in Margate. We are avid fans of modern design and despite the age and weathering, we were awe struck by the house. My wife has not stopped talking about it since Friday. Unfortunately the house was recently sold and will be knocked down soon which is such a shame for an iconic piece of architecture that challenges the idea of what a house can be. What will be built in it’s place will likely be overbuilt and characterless. We are just glad we got to see it before it’s gone.
Thank you,

Chris’s email affected me as if I had just been told that an old friend in perfect health had died.

I always thought this house on the Atlantic coast would be the Last To Stand.  That while other houses at the Jersey shore might eventually succumb to one hurricane or another, this house would survive them all.  It wouldn’t survive simply because of thick steel columns and deep beams, (in fact all it’s structural members were slightly oversized), but because my IMAGINATION had been shaped by the everlasting scars of DREADED FEAR.  To understand what I mean by “IMAGINATION had been shaped by the everlasting scars of DREADED FEAR,” the reader should turn at the conclusion of this article to another one I posted on this website called WILDWOOD – A Miracle of Survival.  It is an account of how my brother and mother and I survived the devastating hurricane of 1944 that destroyed much of Wildwood, New Jersey.  My father, who stayed in Philadelphia to attend to his legal practice, had rented a small apartment for us on the second floor of a small, beach-front house. After the hurricane did its titanic damage, we discovered we were surrounded on all sides by ocean.  The edge of the sea, which had been eastward of us before the storm, now was three blocks behind us.  Our house stood alone in the sea: life guards had to rescue us by boat and ladder from a lonely second story landing whose wooden steps had been swept away.

When Roberta and Morton Shiekman commissioned me in 1967 to design their house, I instantly revisited all my memories of being brought to the threshold of death.  That fear guided my pencil (this was before computers did the drafting) to create a house that I was determined would never succumb to the forces of nature; and it never did.

Jeanine Autret, a writer for the now defunct [Philadelphia] Evening Bulletin, authored an article called “Open To The Sea” for the Bulletin’s (Sunday) Discover Magazine in June, 1972   Her words resonate with me today in a way I never anticipated as I face the emotional blow of knowing this house will soon be demolished.

What follows are excerpts from her article:

“The design of a house at the shore’s edge is a special sort of challenge for any architect.  Artistically speaking, the problem is one of achieving a psychological transition between the scale and needs of human beings, and the vast, illimitable spaces of sea and sky.  Practically, it means employing the kinds of materials and construction that can withstand the ravages of wind and wave, of salt and sand.

“In addition there are the specific concerns imposed by the site itself and the people who have chosen it for their home. Space tends to be limited by the high value of shore-front property; and its use must conform to the life and temperament of the owners.

“These were, then, some of the factors that architect Joel Levinson had to deal with when Morton and Roberta Shiekman asked him to design a year-round home for them in Margate, New Jersey.

“In satisfying all these needs, Levinson produced a house of bold simplicity, centered upon a spatial arrangement, so unusual, yet so perfectly right for the people and the place, that it seems like a totally new invention. 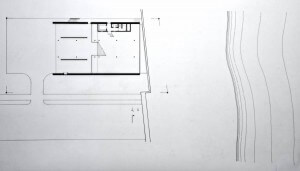 “On either side of the house, at right angles to the sea’s edge, are steel framed sheer walls, broken only by a few windowlike openings, whose exterior is sheathed in natural redwood siding. (The interiors catch the light with their white-painted plywood.)  These walls and the roof form an impressive space, open to the beach, 14 feet above the high-tide mark.

“This space is divided very simply: Half of it, on the side nearest the street, is enclosed to make the house proper.  [See shaded area in cross-section directly above. [jl]  The rest of it, unbroken except for the narrow white pillars, is Levinson’s unique concept, the Spatrium.  A word he coined, it carries suggestions of space and of the old Roman atrium, an open space entirely inside a house that combined the delights of outdoor living with the equally appealing charms of privacy. 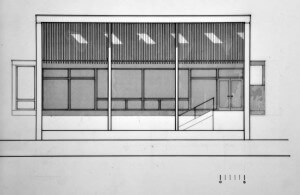 “Here, of course, it is the sea━the wind, the sound, the sight of it━to which the space opens, rather than the direct sunlight of the atrium.  From the house there is a perfectly framed view of the sunrise, followed by floods of morning sunlight; but as afternoon deepens, so does the shade.  And there is moonlight in the nighttime: One of their most memorable parties was held under a full moon.”

As I read Jeanine Autret’s paragraph about the view from the porch out to the sea, I recall fondly and with pride what Matt Ehrlich said when I took him to see the house for the first time two years after he had referred the commission to me; it was soon after I had first opened my architectural practice under my own name.  Matt was a Philadelphia architect much my senior and a lover of classical music.   We parked behind the house, walked under the house proper which was raised one level above grade, then walked up the steps to the ‘Spatrium.’  As we strode to the front of the porch with the sea waves marching in from the horizon and puffy white clouds animating the huge sky, he said “I hear the opening chords of Beethoven’s Fifth Symphony.”   I must confess that I too feel powerful emotions every time I walk forward and see the sand, water and sky framed by the white side walls of the porch.  This experience is probably what moved Chris Menchin to email me and it is probably what all visitors feel when they first walk forward in that grand outdoor room.  You feel like you own 15 miles of the horizon and all that exists between you and that horizon.  I have moved from calling the atrium, or porch, a Spatrium, and now refer to it as an Outdoor Room.  The reader may be interested to know that on this website is an article I wrote for a Japanese magazine dealing with Outdoor Rooms.  It can be found under Writings > Architecture > Outdoor Rooms.  Click the small reproduction of the first page, which will take you to a PDF reproducing the entire article at a readable size.

That Outdoor Room, from a design perspective, was a total success and in my judgment a qualified failure.  On the positive side, it functioned experientially from the interior just as I imagined it . . . and then some.  I regard it from the perspective of the home owners and their visitors as one of my finest architectural achievements.  I wish I could say the same about it as viewed from the beach but I can’t.  In fact, the view of the house from the beach has always troubled and embarrassed me.  From my perspective it was an unforgiving miscalculation.  Here’s why:

But I am an architect who unfortunately sees all his missteps in his architectural designs and oftentimes fails to see the overriding positives.  Such is the case with the Shiekman house.