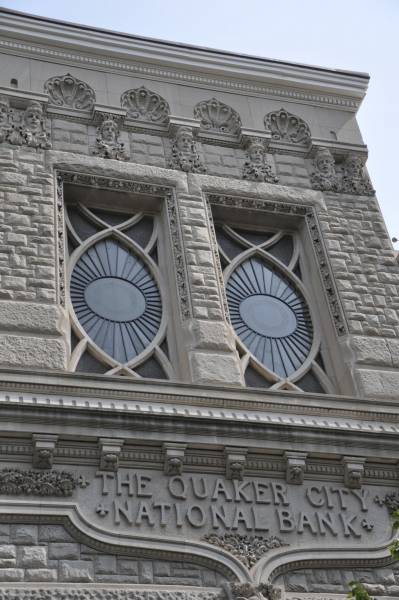 TEXT FOR A SHOW AT THE PHILADELPHIA ART ALLIANCE

The early polemics of Modern architecture called for the abolition of ornament. The smooth, sharp-edged surfaces produced by industry had to be stripped of all forms of ornamentation in order for a building to be called truly modern. An honest expression of structure and program were all that was allowed and all that was necessary.

Roughly one half century after the Modern movement began, signs of stress appeared in the rigid foundations upon which it was based. Beginning about 1960, unconventional buildings were designed based on theories that threatened to undermine the apparently uninterruptible path of Modern architecture into the future. The theories began as mild rebukes but lately have turned into declarations of war. Too much of value had been tossed out in Modern architecture’s house cleaning of traditional elements. Consequently ornament today is being joyfully welcomed back into the Post-Modern vocabulary. Exactly where the modern tradition will end up, and in what way and to what degree ornament will change the face of the International Style is the subject of much fiery rhetoric and the basis for many unusual buildings that are appearing throughout the United States. Additionally there is a growing group of architects who advocate a return to an unadulterated classical architecture rejecting the modern idiom as shallow and useless.

One might ask, what occurred during the last two decades that might explain this dramatic turn of events?

One factor is Historical Preservation. Modern architects who received commissions to preserve our architectural heritage had to reconcile the ornament-free dictums of the Modern movement with the undeniable beauty, richness, and elegance of the buildings they were now asked to preserve. Having to prepare construction documents with traditional details and work unfamiliar problems posed by the use of ornamentation caused architects to regard this work not as the dreaded activity they imagined it to be, but one with considerable artistic rewards. The long overdue campaign to preserve our nation’s architectural heritage resulted not only in that heritage being preserved but also in its altering the future of architectural practice and theory.

Another development influencing the acceptability of ornament was what can be called the Woodstock ethic of the early 60s and early 70s. During this period of social revolution and upheaval, there developed a mounting antagonism toward the starkness and impersonality of industrial aesthetics.

In protest, a widespread crafts movement emerged aimed at personalizing the environment and as a consequence many forms of forgotten ornamentation were rediscovered. Due to the pluralism of the period, which found people pulling in all directions, an era of unusual tolerance emerged for all things strange and unfamiliar, which is best exemplified by the then popular phrase “doing one’s thing.” This was a perfect social climate in which to break rules, upset tradition and bring forth new ideas. Renegade philosophies took hold in the design disciplines upsetting the predictable formulas of the 50s.

First, we experienced the battle to have a modern architecture, which was waged and won. It swept clean the drawing boards and permitted a truly original style to emerge, which expressed a new technological orientation in society. But architecture like language is ultimately comprised of a vocabulary that has evolved through centuries of use, incorporating the past rather than rejecting it. And so today the sharp division between the “past” and the “present” is dissolving once again under the influence of a fresh appreciation of what one might call the Architectural Continuum.

It is the individual architect, working as a free and independent artist, who today selects from the long, rich history of architectural ideas those features which are most expressive of his or her individual vision; which best satisfy the architectural program and the needs of the site; and, most important, which best capture the spirit of the times.