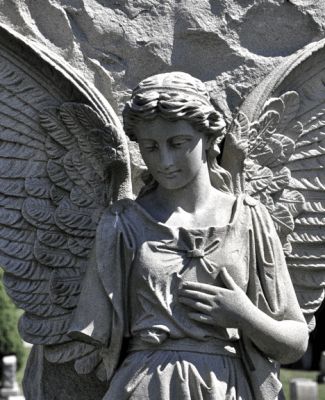 Laurel Hill Cemetery, founded in 1836, sits high above the eastern bank of the Schuylkill River offering a bird’s eye view of the Strawberry Mansion Bridge to the south. The cemetery, second oldest garden cemetery in the nation, was once the most popular tourist attraction in the city. In 1860, 140,000 visitors flocked there to see the monuments that marked the burial plots of the City’s noteworthy businessmen, poets, architects, and Civil War heroes. For those of us who take Kelly Drive back to our homes in Mount Airy, Chestnut Hill, and other suburbs northwest of Center City, the cemetery is a subtle reminder of the kind of place some of us will come to rest when our brief miracle of life has come to an end. This thought came to me in a quite unexpected and poignant manner as I wended my way last week around eroding headstones, hefty mausoleums, and graves both long forgotten and freshly dug.

Though it may seem strange to many, I have always been attracted to photographing cemeteries in countries such as Mexico, Morocco, Italy, and Jamaica. And in this country I have indelible memories of wandering through the lovely Civil War era Hollywood Cemetery on the banks of the James River in Richmond, Virginia; a tree-shaded hilly place with winding paths, Victorian-era headstones, cast iron crestings and fences, and a now-black iron dog guarding the final resting place of a young girl. Cemeteries are rather like museums, filled with beauty marking the place of interment of the long forgotten and the unforgettable. For a photographer they offer objects and vistas unfamiliar, touching, and inspiring. It’s the details that capture my eye where the Roman columned grandiosities of the rich and powerful still cast oppressive shadows on the graven messages left by the less fortunate for the loved ones they lost. But over time, the weather will erase all the facts and sad memories that have been chiseled into stone…and time will turn bones and even granite back to dust.

A friend and I stopped to speak with two Irish workers sitting in a truck. The older gentleman, the driver, is the chief groundskeeper as well as a knowledgeable historian and delightful raconteur. We asked whether there were any Jewish people buried in what seemed to us a cemetery devoted to the remains of Philadelphia’s Bluebloods. “Ah, yes, for sure there are,” he said in a delightful Irish brogue and proceeded to rattle off the names of several individuals and Jewish families. The last name sounded like he had said Brasler, so I asked whether that might be Bob Brasler, and he said, “Yes, that’s him.” There was no permanent grave marker yet, he explained, just a temporary plaque. He said, “Just follow the path along the river and you’ll find it in the shadow of the column with the carved flame on top.” That flame is the marker that sweating scullers look for to turn around and head back to Boathouse Row.

As we searched for the flame-topped column, the view from high above Kelly Drive offered unfamiliar perspectives of the river. Finally we came upon the flame-capped column. Several yards behind it was a temporary painted-white metal marker anchored to the earth with thin metal rods.

To most people, the name would mean little. To me it signified the start of my career in architecture and brought forth a host of mixed and stirring emotions for a dear friend.

Growing up, Bob and my older brother, Hillel, had been friends and when Bob and his wife, Sibby, bought a steeply sloping wooded site in East Falls, they interviewed (unbeknownst to me at the time) Robert Venturi, my then-professor at Penn, and me. Venturi was already well-known whereas I had built almost nothing, save for the renovation of a taproom in Center City Philadelphia and a minor addition to an industrial building in Spring City, Pa. Bob had directed the latter project my way, in part to see what I could do as a young budding architect. Apparently, the tower that Venturi had proposed for the wooded site did not appeal to the Braslers as much as the arbored entrance feature I had added to the industrial building. As a consequence, the commission was awarded to me and I gratefully accepted. Bob and Sibby loved the house I designed for them and hired me again, many years later, for a major addition. That project was a remarkable opportunity for a young designer still in school and its success contributed greatly to my attracting other projects in the years that followed. Bob continued to speak well of my work and, as the good businessman that he was, frequently admonished me for not doing more to promote my firm.

When I came upon the white metal plaque sitting not more than 8” above the grass at Laurel Hill Cemetery, I was flooded with a torrent of memories, regrets, and a deep sense of the transitory nature of human existence. The man I had known had become one simple grave marker among many, a stunning transformation that suddenly caused me to sense my own mortality. Bob had been successful as an industrial real estate developer, played a pivotal role in the development of the National Constitution Center on Independence Mall, and then, with Sibby, spearheaded the Arthur Ashe Youth Training and Education Center in East Falls. Philadelphia and the nation are better for the many projects to which Bob gave his money, time, and perseverance to create. Personally, I will remember Bob as a good friend who gave me the opportunity of a lifetime at a critical point at the start of my career. I failed him in not getting my firm’s work to the Architectural Archives at Penn in a timely manner so that he and Sibby could see their house in a book that the Archives planned to publish highlighting my residential projects. So I felt sad when I saw Bob’s marker at the cemetery for having failed to give joy to a man who had been so helpful to me when I was unknown. Then I realized with some relief that here lie his bones but minutes away from both the house and the woman he loved, and the tennis facility he created for disadvantaged youth, and also next to the river he adored and rowed upon, even in his final days. Beneath the scruffy lawn in the ‘shadow’ of the stone flame on the column marking the place where rowers must return from whence they have come, resides with finality the remains of a good man and a dear friend.