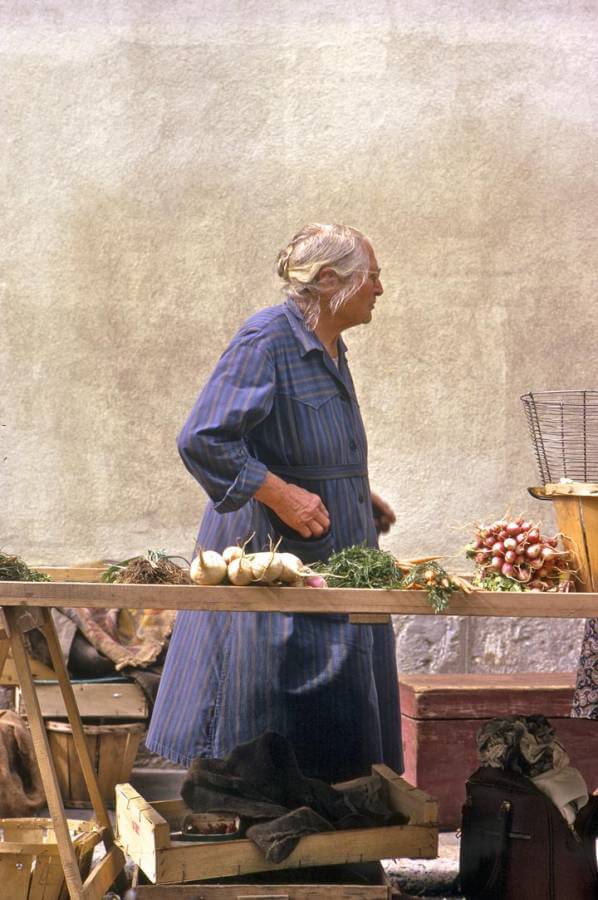 This is one of my most-appreciated and best-selling images. Those who have purchased it in the years since I took it as a 35MM Kodachrome slide in the spring of 1973, remark about its painterly quality and the serious expression of the universal grandmother who was the vegetable vendor. Viewers enjoy the color and rough texture of the stucco wall contrasted with the silky silver of the vendor’s hair. I also like the way the simple plank counter of her stall appears to float in space with its scant collection of full-bodied vegetables.

I sat down across from her (perhaps to rest) on a stoop in a very narrow street in the small northern French town of Châteaudeun. It was during a four-country family trip through Scotland, England, France and Switzerland. I don’t recall taking the shot but I seem to remember, given the perturbed expression on the woman’s face that she was not entirely pleased about having her photograph taken. I may not have asked permission, as I oftentimes do not, or if I did, I may have taken more pictures than were welcome. It once troubled me that her left hand (obviously that of a hardworking gardener) is blurred slightly, but today I enjoy this imperfection which serves as a confirmation that the work is not a painting. The vendor is clearly a living person to which the slow film and slow shutter movement attest.

A curious thing happened in this town. My daughter, Julie, disappeared for a time with a young woman who found her charming. My wife, Carol, and I grew alarmed when we wanted to leave and Julie was nowhere in sight. In a panic we ran around the town, which seemed quite small to us, but finally Julie emerged from a house with a smile on her face and a metal jewelry box in hand. The word Polska was embossed on its hinged top. It was a gift from a young immigrant that we were convinced wished to adopt our daughter. In her broken English, she asked as much.

Châteaudun stands on a prominence on the left bank of the Loire River. When my second wife, Janet, and I traveled through France in 1990, I suggested that we make a short detour into Châteaudun to try to find the market and to give to the descendents of the market woman the print for her I had carried with me from the States. Châteaudun had grown into a good-sized city and Janet and I laughed about the prospects of ever finding the small side street let alone a relative. Nevertheless, I am convinced that we did actually find the street and the stuccoed wall that once was the Market at Châteaudun. Bystanders confirmed that the street had once been used as an outdoor market. But as for finding a relative, well . . . that will have to wait for another trip or for a surprise encounter in the afterlife—if I ever have reason to believe that one exists.