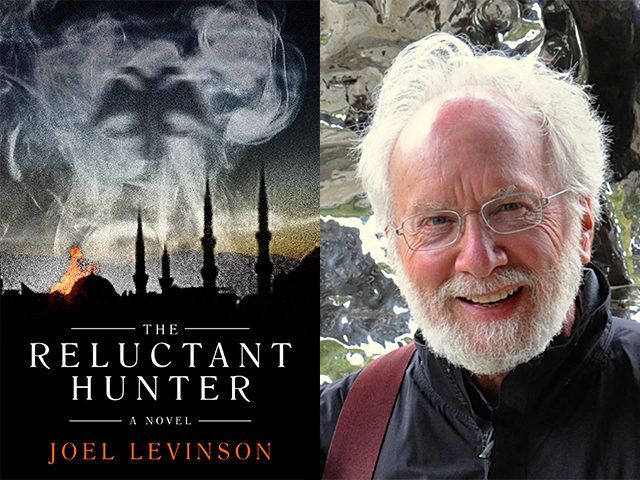 Levinson’s book, “The Reluctant Hunter,” which takes place during the War in Bosnia, has earned rave reviews, even though Levinson has never been in Bosnia.

Joel Levinson, 78, grew up in Strawberry Mansion, dropped out of Central High School and went to Perkiomen Prep, where he blossomed and became president of the student body. At age 13 he wanted to be a farmer, “but my father lied to me and said there were no Jewish farmers. He was a lawyer and wanted a son who was a professional. I think he may have been right in directing me to another field because I would have preferred looking out over my crops from a rocking chair on my porch rather than getting up at 4 a.m. to start a rigorous workday.”

Then Joel said he would become a writer instead, but his father again said no, insisting that he could “always be a writer,” no matter what profession he chose to pursue. “Little did I know at the time that my father’s half-brother had been a mildly successful writer of mysteries who died of syphilis face down in a gutter. It was the age before antibiotics, and there was no hope for a cure. So when I mentioned my interest in writing, my father probably pictured his poor son also in the gutter, starving and diseased, and so with urgency he suggested I first have a profession I could rely on.”

So as a “fall-back” career, Joel attended the School of Fine Arts at the University of Pennsylvania, where he graduated in 1963. He began working as an architect in 1966 and started his own practice in 1969. His work as a self-taught interior designer began in the mid-’70s, when he was commissioned to convert a 360,000-foot warehouse in center city into a regional interior design center.

After a 50-year career as an acclaimed architect and designer, Joel decided to return to his first love (after farming, that is) and write a novel. Now one might expect that the novel would have something to do with architecture (maybe like “The Fountainhead,” by Ayn Rand) or interior design, but one would be way off base.

In fact, Levinson, a long-time Mt. Airy resident, did proceed to write a novel, “The Reluctant Hunter,” to wide critical acclaim, but it was about as far from architecture as a book about grasshoppers. In fact, the book is about a college-age secular Muslim trying to survive the horrors of the Bosnian War, which took place from April of 1992 to December, 1995, in the former Yugoslavia involving Serbs, Croats and Muslims. More than 100,000 people were killed, more than 2.2 million driven from their homes, and the greatest suffering was visited upon Muslim civilians who were victimized by “ethnic cleansing.”

“The Reluctant Hunter,” according to author Steve Purcell, should be “a classic of wartime literature … I had to keep reminding myself that Jusuf and Azra, the focus of the novel, are just kids, 19 or 20. Theirs is one of the sweetest love stories of any novel I’ve ever read. Following ‘The Reluctant Hunter,’ I’m reading a novel by a well-regarded literary writer, and it’s dull and flat and almost amateurish compared to Mr. Levinson’s achievement.”

How on earth did an architect/designer come to write a book about the war in Bosnia more than two decades ago? “I didn’t seek it out,” said Levinson, who has written architecture-related articles for the Local and other publications. “It found me. In 1996 my ex-wife and I agreed to be the host family for Aida, a secular Muslim who was 18 years old. (Several non-profits were helping resettle war refugees at the time.)

For a long time Aida did not want to talk about the war, “but one night she and her friends started talking about it, and it was so powerful. I thought that no one should ever be faced with the situation she found herself in. The next morning I woke up and thought I had to write a short story about it. But then it got longer and longer. I wrote the first sentence between 100 and 200 times. I rewrote the entire book 60 times over a 17-year period. I was never in Bosnia myself, but Bosnians who have read it cannot believe I was never there.”

Because the novel deals so graphically about the insanity of war and its horrific ramifications, it is a difficult read, which is leavened by the insights into humanity and the palpable use of language. Joan Forjohn, a long-time Chestnut Hill resident and Chestnut Hill Local advertising assistant, said, “‘The Reluctant Hunter’ sticks in your mind. There was one scene in particular that I will never forget. The parts involving people trying to escape were very exciting. They reminded me of World War II stories about the French underground.”

Regarding Levinson’s architecture over the last half-century, each project Levinson has designed has its own vocabulary of forms and materials. Some observers say that despite the wide variety of his work, they can spot a “Levinson design,” which Joel thinks has to do with his attention to proportions, detailing and his color palette.

Levinson designed one house in Martha’s Vineyard for a couple whose visions for the house were completely different. The wife wanted a traditional island-style design, and the husband wanted an Eastern Zen ambience. So Levinson managed to combine some elements of each vision into something like an architectural fugue.

“The idea of a house with a ‘split personality’ was so psychologically rich,” he said, “that I wrote a short piece of fiction describing how a New England whaling captain built a house that satisfied his tradition-based architectural vision and those of his Japanese wife, who had agreed to marry him on the condition that something of the house echo her Asian roots.”

Levinson is also an accomplished artist and photographer whose works have been exhibited in almost two dozen countries. He also gets together once a week with other people in the area who share an intense interest in science. In fact, Levinson intends to publish a book about his cosmological work. (Cosmology is a branch of astronomy that involves the origin and evolution of the universe, from the Big Bang to today and on into the future.)