MY LUNCH WITH FREEMAN DYSON

MY LUNCH WITH FREEMAN DYSON 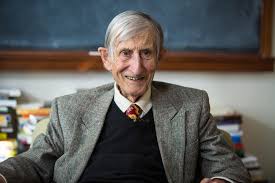 The fact that Freeman Dyson would even respond to an email from a retired architect with no formal training in science (and respond the same day the email was sent) says more about Dyson’s openness to radical ideas than it says about my theory on the dual nature of time. I had sent him the title of a paper I was planning to send to Annalen der Physik along with the opening paragraphs. He wrote back saying he agreed with my theory and invited me to have lunch with him at the Institute for Advanced Study in Princeton.

We had challenges trying to schedule that lunch (his age and travels, etc.) but he wrote to me again just a week before he died saying let’s talk over lunch. It never came to pass, but he did. In retrospect, I realize that I made a mistake in being too respectful in trying to set a date for the lunch through an exchange of emails, trying to work through his secretary or assistant who was probably trying to minimize any stress on the great 96-year old mathematician, physicist, and theorist. If he wrote, come have lunch, which is what he wrote, I should have driven to the Institute for Advanced Study in Princeton the next day, and the day after, until I found him at his table. Sometimes I act boldly, sometimes too deferentially. I should have been bold.

I think he and I would have gotten along pretty well. We are both contrarians and not fearful to consider or advance unfashionable ideas. In September, 2019, he wrote back to me: “I agree with what you are saying in your message. But I am happy rather than unhappy when the word time is used in a vague and ambiguous manner. Here I disagree with you. So long as a science is alive and new discoveries are driving it ahead, the words ought to be vague and ambiguous, to allow freedom for future changes and corrections. When the words are precise and logical, the science is dead. The word time is vague and ambiguous because we are still far from understanding how it works.” I appreciate what I take to be Professor Dyson’s expression of support for the central feature of my thesis but need to ask whether we are now at the point when more discriminating and precise language must be used for the very reason that our understanding of time has been foundering. Binary thinking often creates a false dichotomy exemplified by the following all-too-frequent point of view: if one theory is right, the alternative proposition must be wrong. This faulty mindset applies to time: if Einstein was right, goes such reasoning, Newton must have been wrong. This perspective has plagued our understanding of time since Einstein formulated his novel and profound theories of time and space. However, it seems that this cosmic perspective has led physicists into the morass of the problem of time.

I plan to dedicate my paper to Freeman because, throughout his life, he was willing to go where other physicists feared to tread. He also realized the trap of binary thinking; if one new theory is right (Einstein’s) the old theory (Newton’s) must be wrong. My thought experiment appears to reconcile Newton’s absolute, universal time with Einstein’s relative, variable time. The conclusions that spring from my idea, if confirmed by physical experiment, will turn the table on many ideas currently held dear by the science community, such as time travel. It also may resolve the problem of time.

If my paper is accepted by Annalen der Physik — the same journal that originally published Einstein’s papers on special relativity and general relativity  —  I will have mostly Freeman to thank for encouraging an unknown theorist to follow through on completing his two-decade-long investigation into the nature of time.  Time will tell.